I do watch cookery shows and few years back a show on NDTV Good times ‘Do It Sweet’ by Chef Vicky Ratnani was one of my favourite cookery shows. I used to adore his recipes which were so unique and all of his recipes sounded awesome. He had prepared a recipe on the show ‘Chocolate, chocolate and more chocolates’ and I still remember the way he moulded a chocolate cup using silicon mould. The filling constituted chocolate.

I wanted to prepare then itself but silicon moulds were not available in stores as today. Now I have a silicon muffins tray which I have used to mould a cup made of chocolate. Chocolate mousse in a chocolate cup is a yummy dessert where chocolate mousse is filled in a chocolate cup. I prepared just one chocolate cup and filling for it as I have to eat the whole thing( I can eat chocolates like anything but I really want to keep a check on my weight and Abu is a chocolate hater, especially if it is dark chocolate). Do check out and tell me how you find this dessert……….

Recipe for Chocolate mousse in a chocolate cup

Double boil dark chocolate till one string consistency. Pour it to the mould while it is still hot and with turn around the silicon mould so that the chocolate is spread inside the muffin mould uniformly. 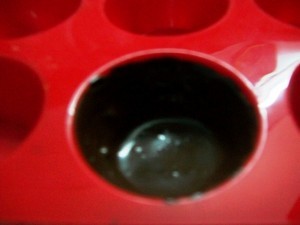 Place it on freezer for 5-6 minutes. 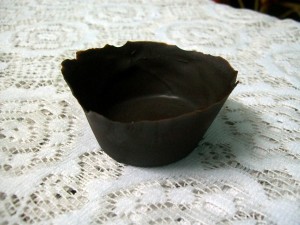 Ingredients required (For filling on a single chocolate cup)

Double boil chocolate by stirring it continuously and when it melts up add egg yolk, fresh cream.

Keep stirring when it gets mixed up well remove from heat and now add peanut butter, vanilla essence and stir.

Mousse is ready and scoop out this to the chocolate cup(Garnish with a fresh cherry on top) and now it is ready to be served. It tastes better when chilled……

Sadya recipes – With tips to save time

Hi, I am Sherien Mohamed Ramzan,the owner of this blog. Cooking has always been a passion for me and this blog travels through my collection of delectable recipes. This blog is my humble attempt to share the recipes that I have tried successfully in my kitchen.I have a full-time job as Assistant Engineer in Harbour Engineering Department. I am married to Abu Syed and a Mom of 5 year old kid.

Garden Foccacia – Going with the trend!!!!